About two months after I was engaged, my brother and sister-in-law came to Charleston to visit. They stayed with their two small boys at a hotel off Broad Street. We spent most of the time they were here walking around downtown, and, at my mother’s request, took a detour into Brittain’s fine gift shop (now closed) where I agonized briefly and rather irreverently selected Herend Queen Victoria as my fine china pattern. It is a lovely pattern. It is mostly floral with bright, spring colors, butterflies and birds, and some gold treatment around the rim. This particular pattern was presented at the London World Exhibition in 1851. The British Queen at the time ordered a complete place setting, and the pattern was later named for her. It remains one of the manufacturer’s most popular designs, though I knew none of this at the time I filled out my registry card, anxious to be done with making decisions that seemed of no consequence, these formalities of marriage and adulthood. 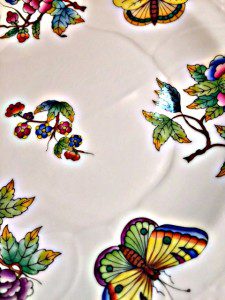 I realize that I am not necessarily alone and not necessarily in the majority when I say that china and silver and gift registries and monograms and choosing fabric for curtains has never been my thing. I think I absorbed an acceptable degree of taste simply by living in close proximity to my mother and grandmother. Enough so that I can put together a room quite nicely (if I do say so myself) and rarely feel the need to ask anyone’s opinions on the matter. So long as the things to arrange are present and intact, and the room is squared and spacious, as it is formulating a plan with less than favorable conditions where I falter. 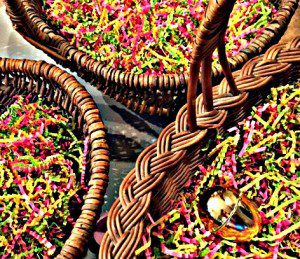 If I can say such a thing without seeming ungrateful, I would offer the gentle criticism that perhaps there was some poor planning between Mother Nature and the southeastern United States with regards to Easter this year. This holiday, or at least the way we hope to appropriately celebrate it, requires sunshine, dry earth, bright new blooms, and the subsequent feeling that all is right in the world.

This year it was gray and dull, and a light and steady rain made the usually happy task of egg-hiding a wet, weary chore. Most of our camellias were wilted, and our home and yard seemed stifled by what can only be described as epic amounts of pollen.

We had the intentions of attending Sunday School and church, but the thunder and lightning had made for a rough night for our light sleepers, and we all slept past the point of getting up and getting anywhere in anything besides pajamas. It was 11 o’clock before we finally walked outside, in raincoats and our Sunday best, off to look for eggs, many of which had slugs on them which we half-attempted to turn into a teachable moment.

It isn’t that it was awful, it was fine. But in all my 38 years of living, I’ve never had an Easter quite so…damp. 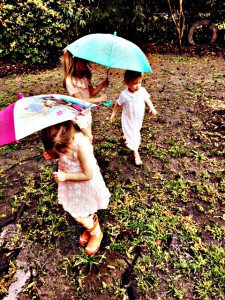 Back inside, the children began recreating the egg hunt over and over indoors. My husband mixed up a batch of Bloody Marys, and I began to prepare Easter Dinner.

Everyone stayed out of the kitchen, and I was able to follow the directions of three new recipes with hardly an interruption. The children went outside more than once. From the windows in their rooms upstairs, they must have seen the backyard puddles getting bigger and bigger. They collected their short umbrellas and slipped out the back door and into their galoshes. And I could hear them laughing and bossing and chasing as I stirred and chopped and whisked and waited. Warm in the kitchen. 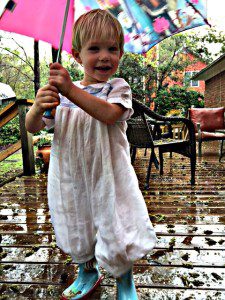 At quarter to six  I made the call to dust off (literally) the good china. My husband took dinner and salad plates down from the shelf while I counted out forks, knives and spoons from my grandmother’s silver. We set the table with less fancy, washable napkins and place mats (they are children, after all), but let the older girls use the pewter goblets instead of plastic cups. We said the blessing, served our plates, and sat down to eat. 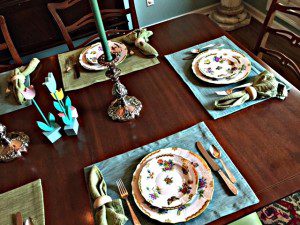 It was a meal of moments. The baby was out of his seat and under the table most of the time, but the children were all noticeably excited to be in the dining room we so rarely use.  There were frequent “cheers,” kind compliments to the chef, and reminders to use forks and not fingers. We talked about spring break and Easter, and they made bold plans to catch the Bunny next year, to find the Golden Egg. The girls helped to clear the table and made a fairly decent case for why we should adopt a rabbit.

It’s a curious habit: the inclination to instill wonder into the holidays. These mascots we employ in an effort to create a point of relativity for the children we know. And it must seem ridiculous, but it is a really complicated feeling for parents, mothers in particular; feeling like this magic, the sense of “special,” is our burden to bear. So I understand why there are bunnies and reindeer and fairies and fanfare and fine Hungarian porcelain: because otherwise it is just another rainy day. We feel we are operating within the window of childhood and only have that much time to connect our children to past traditions, to history and family and faith. Because no matter what you believe, if you have traditions, you want them to carry over, to mean something, and you want your children to wait for them at least as excitedly as you did.

Herend porcelain products are made from a mixture of kaolin, feldspar, and quartz. Clay and rock, essentially. Ground and made into a paste that is then shaped, dried, fired, glazed, refired, hand painted, and fired again. They are released from the manufacturer and sold wholesale to dealers and again to retailers, usually ones that specialize in wedding registries. They are selected by hopeful intendeds and given to them as gifts, typically wrapped in glossy white paper and tied with silver ribbons.

If you are anything like me, they rarely come down from their high shelves. But when they do, it is because of some sort of occasion that asks for more. Because it was raining, because we didn’t make it to church, because the rest of the day came and went and the meal itself needed to be the gesture, the act of service, the formal nod. Much like a well-written thank you note, thoughts gathered with purpose and delivered in your best penmanship. An attempt to sincerely convey gratitude. Just a plate, just a note, just an Easter egg in the grass on a rainy March morning. 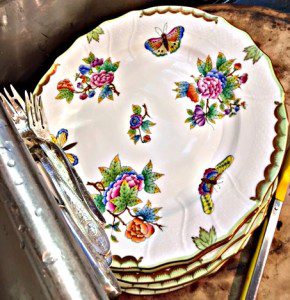 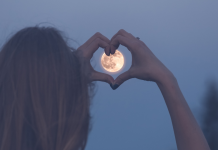 A Selenophile, the Hunter’s Moon, and Letting Go This Holiday Season 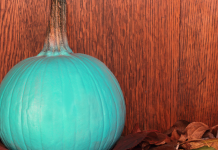 The Special Meaning of Teal Pumpkins 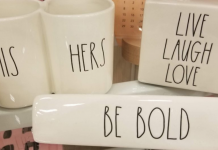 Confession: I’m Cheugy and Proud of It