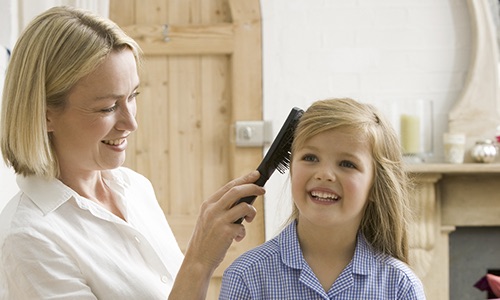 *Thank you to Sheila Fasser for this guest post on a topic that all parents need to know about!

It was a picture perfect summer day. The sun glistened on the crystal clear lake as my entire extended family arrived to Grandma’s lake cottage for the 4th of July. Our family had grown from 6 to 42 nieces, nephews and grandchildren, including a newborn. Ahhh, such a happy time…. until someone whispered in my ear “could it be lice?”

That was the summer of 2010, now known as the worst family vacation ever! I have never seen a group of intelligent, well-educated, reasonable people absolutely freak…out…over a little bug!

As the only nurse in the crowd, and a school nurse to boot, the insanity that ensued became my problem to solve. I had been a volunteer nurse at my children’s elementary school for eight years and thought I knew well how stressful and dramatic a diagnosis of head lice could be. I had no idea until it hit my own family that summer.

That experience, combined with the frustrations of dealing with head lice as a school nurse, set me on a quest to find out more about this little bug that nobody likes…or likes to talk about.

Volunteering as a school nurse, I saw my fair share of head lice. I didn’t mind checking heads or calling parents. The problem was, more than half of the students whose parents treated for head lice would return back to school only to land in my office a week or two later…with head lice!

I determined that the majority of parents were treating the bug with lice shampoos or prescription treatments, which clearly were not getting rid of the lice. I wanted to find out WHY they weren’t working.

It turns out that lice, a human parasite, has evolved to resist the chemicals commonly used to kill them. It’s very similar to the human body building resistance to antibiotics.

Twenty years ago, moms treating with Rid or Nix would have little trouble getting rid of lice. But over the years, the bug has mutated enough to withstand the effects of the pesticides and chemicals found in lice shampoos and prescription treatments. The problem was so bad it caught the attention of researchers, who found a whopping 98% of head lice are resistant to the most common lice treatments.

What I saw at school every week was now making sense to me. Parents thought their battle with the bugs was over after using lice shampoo and combing out eggs. A few weeks later when they noticed bugs again, they assumed the lice had ‘returned’.

The reality was, the lice were never killed in the first place. Meanwhile, the child was back in school, going on play dates, and hugging brothers and sisters.

Before long, what started out as one child in a family with head lice quickly turned into three …and 85% of the time, mom got it also. Not only did the lice spread, parents endured weeks of stress, wasted money on chemical shampoos, and tedious hours of combing out nits.

Understanding the science behind the life cycle of head lice and the neurotoxins used to kill them, I tell everyone I know to save time, money, and stress by avoiding toxic chemical shampoos and prescription treatments.

The most effective head lice treatment involves physically killing lice and eggs with methods such as dehydration. Combing can also work provided you use a toxin-free shampoo to first suffocate the live lice and then comb out every single egg/nit and repeat the process three times over the course of two weeks. Head lice cannot become resistant to a non-toxic approach and it’s much safer for your little ones!

Throughout this journey, I learned more than I ever thought I’d care to know about head lice. But once I understood the science behind what works and what doesn’t, I made it a mission to educate parents so they could avoid the drama that hit my family back in the summer of 2010.

Sheila Fassler, RN, worked as an Intensive Care Unit nurse and a volunteer school nurse at her children’s elementary school. She founded and owns Pediatric Hair Solutions, the only licensed health care facility dedicated to the treatment of head lice, located in Mount Pleasant and 8 other locations in the Carolinas. Sheila was born and raised in Youngstown, Ohio. She attended the Akron University College of Nursing. After marrying her husband, the two moved to the Carolinas to start a family. The couple’s two children both attend the University of South Carolina.