Hi again! Did you enjoy reading my Best of Mom Moments-Part 1? If so, then I think you’ll really enjoy the rest of these stories, shared with me from fellow mom’s also in the trenches of motherhood.

-I was changing my daughter’s clothes when said that she wanted to get a shirt on. Suddenly she grabbed her boobs and said “no mommy, monkey eat my boobies!” I said “what?!?!” She was serious and said “no mommy, monkey eat my boobies!” I was so confused and asked her where she heard that. She said “me” and pointed to herself. I said “but who told you that? That’s not going to happen. Did you dream that?” She says again “no mommy, monkey eat my boobies!” At this point, I am legitimately concerned. This back and forth went on for a while, until I realized that she didn’t want me to put her shirt on because she needed to “breastfeed” her monkey before nap time. It is amazing how much little minds pick up through observation. I guess she learned what breastfeeding was very quickly after the arrival of her baby brother!

-My daughter had not been acting like herself all morning. My sweet girl who normally has an insatiable appetite was not showing any interest in any food, even her favorites! We went out for the morning and she seemed to be feeling much better, but I noticed a look in her eyes that stated differently when I went to get her out of her car seat. As I picked her up to give her a kiss, I was “pleasantly” greeted with projectile vomit that made it into my mouth through my puckered lips. I had never seen a baby throw up that much; we were both covered in vomit–yuck!

-I will never forget the day my daughter was born. It all started with knowing that my mom, who passed five months earlier, was in the room with me. I knew this because my nurse’s first name and the doctor’s last name spelled my moms first and last name. When my daughter was born, I just remember her looking right at me and I couldn’t stop looking at her. This child I had waited so long for was finally here in my arms. 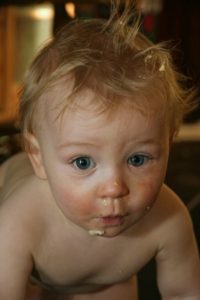 -Before kids, I was a very punctual person. Now with two, not so much. I always say that I am one diaper change away from being on time because it never fails that one of my kids loads their diaper up seconds before walking out of the house. As we were preparing to go out one Monday morning, my son, of course, needed his diaper changed right before we were about to head out. As I was changing his diaper, I heard our dog making a weird sound, but didn’t think anything of it. After I finished up his diaper change, ah-ha (and UGH!), I quickly figured out what that weird sound was; it was my dog puking! Wait, it gets worse! Because I didn’t respond to that “weird sound” immediately, when I turned around I found my daughter making swirls in the puke as if it were finger paint and enjoying it for an appetizer before her mid-morning snack! Yeah, disgusting, disgusting, disgusting!

-The beginning of my infant son’s self-rescue survival swim class was the most terrifying thirty seconds of my life—It was like watching the first thirty seconds of what would happen if my son was drowning, except in this case, I couldn’t do anything but watch him struggle until the instructor picked him up. During this process, my son swallowed water and air, some days more than others and would vomit—like, a lot, all over me and the side of the pool. By the end of the six week class, he was able to “fall in” and turn himself over and float and kick on his back for about five minutes, all while wearing shoes, jeans, a regular diaper, a shirt, and a hoodie. I was so proud of my son for making it through the lessons, especially with relatively few tears. He was so strong and so brave! While it was terrifying, it was also such an amazing experience and gave my husband and I a newfound level of confidence should we ever find ourselves in that frightening situation.

-It was my summer break and I decided to do what my son’s school calls “Potty Training Boot Camp.” I spent the day celebrating my son’s new “big boy underwear,” hoping it would make him believe that they were so much cooler than a diaper, and taking him to the potty every hour. Instead of putting him in “tighty whities” as some may call them, I thought why not put him in boxers? Biggest mistake ever! The day was disastrous—my son would hold his pee and would never go in the potty, but did decide to poop, leaving a trail in his wake. And by trail, I mean it was all over the place! It took all my might not to cry!  Oh the “joys” of potty training!

-When I had to take my car to the dealership for maintenance. I was totally prepared with snacks and things to play with for my 2.5 year old daughter. I even pumped breast milk and had it warm and ready for when my then six-week-old son got hungry. I’ll be honest, I was feeling like supermom ready to tackle the morning. When I arrived at the dealership, they told me that what was supposed to take one hour was now going to take three hours. There was no way am I was sitting there with two young kids for three hours. Thankfully, the representative at the dealer felt sorry for me and let me take a rental car. Crisis averted, I switched both car seats and all of our stuff over? Chick-fil-A, “perfect” I thought! My “supermom” vibes were really starting to shine by this point and the voice inside my head said “man, why do people think this mom thing is so hard?!?! I so got this!” Everything was actually going pretty good.

And then it happened…my son was about halfway through his bottle when I see my potty training 2.5 year old daughter at the top of the slide make the “oh no I have to pee face!” I jump up and run in the play area. The three of us hurry off to the bathroom. All three of us (stroller and all) get into the bathroom stall; I quickly sanitize and cover the toilet seat and whip around and yank my daughter’s pants down and lift her up on the toilet. “Ah we made it” as I embrace a sigh of relief, but then I look down and what I had perceived as the “I have to pee face” was actually a poop face, and not an “I have to poop face” but an “oops, I already pooped!” Oh my goodness, poop was everywhere! In the midst of trying to clean it all up, my son is still screaming bloody murder because he is hungry. Oh, and those baby wipes I needed right now, they are on the table back in the restaurant. Those “supermom” feelings I was having earlier quickly disappeared. Next time I think I’ll let my husband do the car maintenance!

-Last summer when my daughter was newly two, we went to the beach one afternoon. We got home close to dinnertime and since my husband was out of town, I figured it was a perfect night to order pizza, watch a movie, and go to bed early. I ordered the pizza and since they said it would take thirty minutes, my daughter and I hopped into the shower. About twenty minutes later, I hear the doorbell ring from my bathroom. I was still soaking wet in my towel and my daughter was too. I quickly threw on some clothes and ran to the door. As I turned around to grab my wallet, there is my daughter standing in all her glory, for all the world to see. I laugh and say “oops, baby go back in the bathroom, you’re naked silly!” She thinks this is hilarious and runs away laughing.

-As I’m looking through my purse for a smaller bill to pay with, she keeps running back and forth screaming and laughing. I look at the pizza boy for some sign that he is okay with this, and hoped that maybe he had a little sister and would understand, and we could laugh about the craziness occurring behind me. Nope, nothing, he feels awkward and now so do I. Meanwhile, my daughter is still naked, running around and screaming, my dog is barking, and I’m just trying to pay for our pizza so this awkward moment would end. To my surprise, it very quickly got even more awkward as I realize that my nightgown had been tucked in my underwear the entire time. Oh, and did I mention that I was pregnant at the time? Well that was probably the last time he will ever deliver a pizza to my house!

-I was reading my son a book called “Pout Pout Fish.” It ends with two fish smooching! In front of extended family, my son pointed at the fish and said, “Look, it’s the mama and the Matthew!” Everyone looked at me like I was going to be smother-mothering my son right into early therapy!

What are your favorite (or not so favorite) mom moments? We would love to hear! 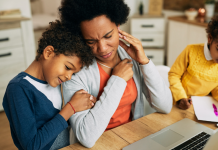