I am so inspired by Charleston mama, Lindsey Henderson. She is a working mom and community activist, raising two amazing activist kids. In a climate when politics seem so combative and overwhelming, I knew I wanted to interview Lindsey before the upcoming elections (it’s almost November y’all!). No matter what political party you align with, I think we can all agree that being an informed voter and getting involved in causes that are important to you is an amazing example that we can set for our kids. I think you are going to be inspired by Lindsey too! 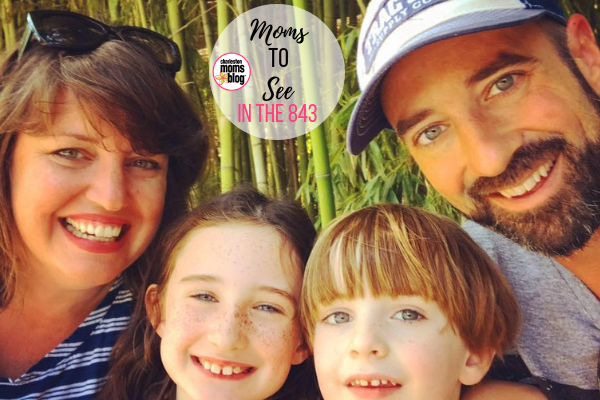 Let’s start with the basics! Where did you grow up, what brought you to Charleston, what do you love about living here?

I’m originally from Columbia, S.C. and moved to Charleston after finishing undergrad at Winthrop University in 2002. I  was here for three years and then moved back to Columbia to pursue my graduate degree in Public Administration at the University of South Carolina. My husband Tab and I were college sweethearts and finally got married in 2007 after graduation. We promptly moved back down to Charleston – we just loved it here! After working with the Head Start and Early Head Start programs in the Charleston County School District, I decided to stay at home with my first baby, Betty, who was born in 2010. Louis came in 2013 and as a new mom of two I decided it was time to enroll Betty in preschool. When I went to tour Fort Johnson Christian School, I fell in love. Betty started in the three-year-old program there and I started volunteering for the Director at the preschool. When Louis was a toddler I was hired on as Assistant Director and then became Director of the preschool in 2016. My family loves Charleston and specifically James Island. We have been here since we moved back in 2007 and love the proximity to the beach and the city – we are out on Folly Beach at least 2-3 times a week! I try to live the hashtag #lovewhereyoulive – we are very fortunate.

I’m really inspired by your knowledge of local issues, your involvement in the community, and being an activist for causes that are important to you. Have you always been like this? Was there one thing that happened that made you think, “I need to get more involved”?

When I was in undergrad at Winthrop University I started working for York County United Way. The Director of “Success by Six”, which was an early childhood initiative, had a lot of faith in me. She invited me to accompany her on several trips to DC to help lobby for the Child Care Development Block Grant and Head Start funding. I loved every second of it. I became an avid early childhood advocate which led me to my Public Administration graduate degree. I tried to stay very active in that field, even after my children were born. Once I was a mama, things changed for me. I saw how directly affected we were by decisions made in our local government and I became more active in our James Island community.

I am inspired by so many of my friends who are ardent activists. It can be a full-time job and it’s mostly done as volunteer work. I still struggle with balancing wife/mom/preschool work/activism. I don’t know that there’s ever a time when any mom really figures out that balance – just taking it day by day.

Tell me about your awesome kids and the James Island Ocean ActKIDvists! How did it get started? What’s their mission?

A year or so ago James Island was pushing for a moratorium on apartment complexes. I felt strongly about this because overcrowding on James Island is something that affects our everyday lives and will affect my children in years to come. My children joined me in these protest efforts at City Council meetings in a way that they could understand: saving our green space and knowing that James Island schools are already at capacity. After that, I had a friend refer me to a new initiative in Columbia called ActKIDvist. The premise is that children should be seen and heard and that just because you are a child doesn’t mean you can’t make a difference in your community. Betty, Louis, and I took on the Summer ActKIDvist challenge. We had to identify an issue and then create or attend an event or awareness campaign around that issue.

It was no question that the children wanted to do something involving sea turtles. We had been attending sea turtle releases since they were both toddlers and we had just recently visited the sea turtle hospital at the South Carolina Aquarium for the first time. Kelly Thorvalson, the Conservation Programs Manager for the aquarium, met us and educated us on single-use plastic and the effect it has on our ocean and marine life. The children partnered with the aquarium and the Terrace Theater (a movie theater on James Island) over the summer to raise awareness about single-use plastic. It was a huge hit! They collected over 70 signatures from James Island children pledging to remember reusable bags at the grocery store for their family. The kids really took ownership over the entire event.

It has since blossomed and they have two friends who have joined them in their efforts, Makena and Liam Ryan. Together they formed the James Island Ocean ActKIDvists this summer. Their goal is to educate other kids about single-use plastic. They were just honored as “Heroes of the Lowcountry” by our local Fox news station and they will have a booth set up at the big FAM JAM festival in Marion Square on November 3rd! I am so proud of how involved they are in this effort.

Any tips for raising involved and informed little citizens (aka: awesome kids)?

You can instill a sense of community responsibility at an early age. At our preschool, we really encourage families to get their young children involved in a charitable giving. When we do food drives for James Island Outreach or Lowcountry Blessing Box, I encourage parents to take their children shopping with them and explain to them that not everyone has what they need but there are ways we can help them. We did this with hurricane relief efforts as well. “I Heart Hungry Kids” is a local nonprofit that was founded by children and gives children as young as three years old an opportunity to volunteer.

Sometimes I feel overwhelmed by politics in general. There are so many issues that each candidate has an opinion on and it’s hard for me to navigate. When there is so much information (and when politics often gets so nasty) part of me feels like “Ugh. I’m just not going to vote”. Any words of wisdom for me? How can I get motivated to spend the time to do a little research?

I have one major issue that I feel strongly about and I really try to focus my efforts in that direction. That and helping my children with their community involvement through James Island Ocean ActKIDvists. It is tempting to turn a blind eye because it is too much, but you do not have to know about every single issue! What is important to you? South Carolina’s education system? Our healthcare? Our environment (offshore drilling)? Find the thing that matters to you and start with that.

Why is it important for moms to vote in November?

I think it’s so important for children to see you involved in the political process and to know that this is part of being a citizen. I like to take my children with me to vote. My generation and the generations before us grew up in an atmosphere where it was impolite to talk about religion or politics. We do not shy away from either topic in our household. I want my children to feel comfortable talking about political issues and asking questions.

Do you have any tips for becoming a more informed voter?

Yes! First make sure you are registered at your current address. You can do this by visiting www.scvotes.org – you need to be registered by October 7th to vote in the upcoming November elections. Then visit www.Vote411.org for a current candidate guide. This guide is put together by the League of Women Voters and is non-partisan. These November elections are VERY IMPORTANT to South Carolina – check your voter registration right now – it’s super easy!

Alright Mamas! We only have until October 7th to get registered to vote! WE can be the change we want to see in the world (and so can our kids)!

There are so many amazing moms in the Charleston area doing great things! Check out some of our other Moms to See in the 843: