I can think of several different things I said (or thought) I would never allow my children do. Well, guess what? Almost five years and three kids later, I can tell you exactly where to find those words. In the trash. The rule book I had created in my mind long before seeing those two pink lines appear on my first positive pregnancy test, is now completely non existent.

In an effort to “keep it real,” and be completely transparent, I thought I’d share a few of those things I said I’d never do:

If there is one thing I have learned from being a mom, it’s that I have to be flexible! Along with that flexibility comes being OK with unmet expectations. The expectations I have for each day, no matter how realistic they might be, will not always be met. I have learned to throw out the rule book every now and then, and be 100% ok doing so.

I’ve only been a mom for five years, and I know I have a TON of things left to learn. However, if I could go back and fill in that blank now I think I would say, “I will never let my children go a day without feeling loved.” One day they’ll be out of my bed. One day they’ll be fixing their own meals, and I’ll have to beg them to sit down with me to watch a show on TV. One day I will get to sleep in and nap whenever and however long I want. That will be one glorious day! 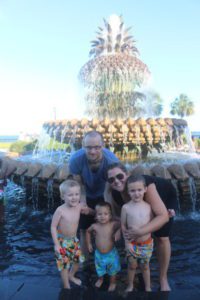