The “A” word prompts different reactions and feelings depending on who you are, your sense of identity, your experiences, or simply who you know. These are the chronicles of how the meaning of the “A” word has transformed for one mama: yours truly.

The very mention of orphan brought me to tears. My husband and I were feeling strongly led to adopt a child. I was terrified at the endeavor, trying to figure out the how-to and the when-to. Feeling inadequate, yet compelled and passionate — there was no going back as my heart enveloped the notion of ADOPTION.

That “A” word made my eyes glaze over with bubbling hearts, full of hopes and dreams of providing for and healing the hurts of a child without a home and family of their own. Oh, the simple days.

In the thick of paperwork, education requirements, and fees galore, the “A” word would become like a trigger of annoyance to me when used in any other context than ours. Adopt a highway. Adopt a classroom. I would think, “Why can’t people use the word ‘sponsor’?!” Someone titling an “adopted daughter”, as in, their daughter’s BFF induced an eye roll from me behind a computer screen.

At that point, my life had already been consumed for a couple years with pursuing our first child. I felt this defensiveness with people tossing the “A” word around. You could call it arrogance, or pride, on my part. You could call it exhaustion in a season of overwhelm. You could call it a wishing people knew just how many hoops we were jumping through to be able to claim our type of adoption — and just how trying the endless tasks were to get to our baby across the world. I was emotional, and wanting to give myself to my child already, knowing we still had quite a ways left in the process. It didn’t feel fair that the “A” word could be used for cleaning a highway, giving toys to kids for Christmas, or supplies to classrooms.

As we ran further down the educational road of the adoption process, the bubbling hearts in my eyes began to shatter from the “A” word. We had a name and a face we were chasing after for over a year. It perplexed me how I was missing my baby boy across the world, and I hadn’t even met him yet. Angst was deep-seated in my bones, and frustration overtook me as we waited and poured over more tasks to get to him. I didn’t expect to feel so incomplete with this toddler becoming my heart, held as far away as he could possibly be on this planet. We lived for the three quick-snapped, blurry pictures of him sent to us through the agency nearly every month.

And we cried for him as we completed education requirements and the weight of loss associated with adoption became real and heavy. A new, tender, broken perspective came over us as we started putting ourselves in our son’s shoes. His life had already changed with placement into a foster home, a loss taken place in his little baby body and mind. And still to come, his foster mama, all he consciously knew as mama, was going to be taken from him when we arrived. Oh, the very purpose of their foster care system is temporary, but the loss for my son was about to shake him to the core.

Children are resilient, yes. But there is tangible trauma in the changes. The “A” word had gotten a whole lot more complicated.

With our three-year-old boy finally in our arms, our daily life had gone from 0-60. His world turned upside-down. When my son was sick for the first time, I would use the “A” word as a qualifying excuse for my anxious brand-new-mom questions to the nurse over the phone. When a random person commented on how cute he is as they heard him speak out in broken English, my heart would burst with pride over the phrases he had learned. I would explain to them that we recently brought him home from Korea.

I would also cringe when people sweetly told us how lucky our son is to have been adopted by us. I knew the intent was to encourage us in new parenthood and celebrate that he has a family now. But I also knew he hasn’t been lucky in his little lifetime. Loved, yes, but not lucky. My son has gone through more grief and life change than I have. When I would try to hold and comfort my child as he wept and wanted the mama he knew before– it didn’t feel very lucky. He’s deeply loved by his birth mother, his foster mother, and me, his forever mother through adoption. But he has had a heck of a ride so far in this life.

With the changes in his world so far, and our eyes opened, the “A” word symbolized our striving to help our son feel secure. We had to prove to him that we are his parents now and will meet all of his needs. We have had to consistently remember his trauma and loss, and reassure him that we are family forever. Although there was no way for him to understand the meaning of these words, so the first time I went out without my son still weighs heavy in my memory. My spirit broke as I walked away from his cries, his tone reminiscent of the early days apart from his foster mom. But once we were bonded, we needed to prove to him over and over again that we will always come back. Always.

It’s difficult to express the deep love to someone who hasn’t been exposed to adoption much. As we’ve grown through the attachment process and bonded our hearts and lives together, it stings when someone refers to my child as “not really mine” because he’s adopted. Is he biologically my child? No. But believe me, that doesn’t matter in the day-to-day that I mother him. Over time, this little boy has truly become an extension of our beings. I would give my life for him. He is our baby. His joy is my joy. And his pain is my pain. I know I share a motherly love for him with two other mamas on this planet, but that doesn’t make our family not real.

Bear with my pickiness on semantics here, but I beg to bring it more attention in the world of adoption, and other matters. Having a Social Work degree, I’m aware and sensitive of the social nuance of labels on people.

For example, stating someone “is bipolar”, or “a bipolar woman”, puts far too much emphasis on the disorder and dismisses the person and their identity. Social workers are taught to speak of “a woman with bipolar disorder.” A subtle difference, but impactful. We are people first.

Let’s wrap that around to families through adoption. This is where I stand with the “A” word right now: I can’t bring myself to claim I’m an adoptive Mom anymore. I’m a Mom through adoption.

While I used to proudly claim this “adoptive mom” label, over the past year and a half of our son in our arms, the “A” adjective has faded in my sense of identity. It’s not that I’m ashamed of it, it’s that I don’t feel like an adoptive mom anymore. I’m just Mom. He’s not my adoptive son anymore. He’s my son. He’s my own. I’m his real Mom. This doesn’t mean that we ignore the fact that he’s adopted. We intend to always have an open line of conversation with him about his story as he learns more and grapples with it. We will always honor his birth mother and foster mother. They are part of him. We love them too. They are part of our family.

My previous defenses against using the “A” word for other contexts I mentioned earlier? It’s all fallen to the wayside. I don’t get up in arms about it anymore. Because after the life change of adopting a child, and binding our hearts together, a miracle has unfolded. I’m just Mom now. It’s as simple as that.

Who knows? I suspect as my son grows older and walks through different stages of life, the “A” word may come to have yet more definition for him and for us. My hope is to follow his lead and gently support him in whatever ways he experiences what that word means to him. More on that another time! 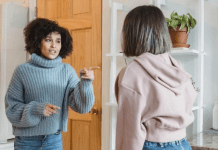 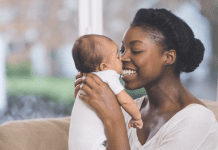 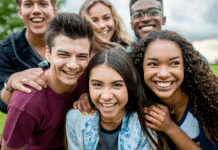